Amongst the top entries on the list of reasons why I love golf is that it’s a great excuse for getting the ol’ gang together. It’s the perfect atmosphere for catching up, “remembering when,” and having a few laughs at one another’s expense. That notion is the driving force behind O:GP’s first event of the year, and all-time:

There’s a good reason we chose The Shattuck Golf Club for this one – other than the breathtaking views, friendly staff, and tricky 18-hole course – which will also explain its name. I, and just about everyone else in these groupings, graduated from Franklin Pierce University in nearby Rindge, NH. I love coming back to the area and strolling down memory lane, because so much of my life ties back to that time. On top of befriending these characters, I was lucky enough to meet my beautiful wife, and my sister Jill met her fiance Chris here.

So it’s a college reunion of sorts, but why the name? In 2007, the school took its current name, switching from college to university. But we had too many inside jokes based on FPC, so we’re holding out. It’s STILL FPC to me.

(Thanks to fellow FPC alum I.D. aka Indy Jonez for the tunes.)

As you can tell, there were plenty of shots taken throughout the day, but Rob got his good ones out of the way early. The second-year golfer smacked a wedge closest to the hole on #2 and sank the putt for the first birdie of the day. Other than the occasional hawk, the birds were hard to come by as things moved along.

The course is as tricky as it is beautiful. And when they tell you to consider leaving the driver in the bag, it’s a warning that shouldn’t be ignored. You really have to pick your shots as wandering tee shots often go missing. There are a few fairways that give you some room to work with, and the occasional extended roll, so take advantage when and/or if you can.

I was extremely excited about the round, not only to get my first round at the Shattuck, but also to catch up with the guys I lived with for 4 years of college. They are probably sick of me by now, as I would not shut up the entire time. Case in point:

In the end, we have to decide a winner so we know who to make fun of over drinks afterward. We discussed teams, pairings, and slew of other games to make it interesting, but as things tend to do with this bunch – we dropped most of the formalities and just played around… I mean a round.

As discussed in the opening, there’s so much scenery to take in, it can often be distracting to the golf game. (At least that’s my excuse.) The proof is in the block of pictures below. But don’t let all my sarcasm fool you; The Shattuck is a must for any golfer or nature lover.

A view of Mt. Monadnock from the first tee. 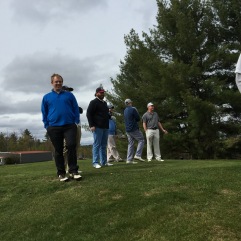 Nevin and Rob in the fairway on #1. The clubhouse in the background.

The views have a way of distracting you from making putts…

A look across the pond to the 12th green. At this point all three groups were in view of each other.

Looking up at the back of the clubhouse from the 9th fairway. 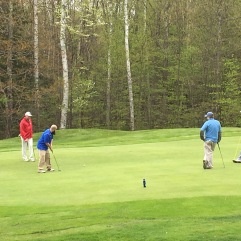 Jeff, Gulu, and Willis on the 18th green.

Looking at the 12th green from the 13th fairway.

2 thoughts on “Round Five: The Shattuck Golf Club”