It’s Not Always About How Well You Golf…

This will likely be a common theme throughout these posts since only one, possibly two of our guests this year will be actual pros. But it’s an important lesson – something I’ve learned from the game (and my Father) that has so much relevance in other aspects of life. I’m paraphrasing here, but the sentiment remains:

So while we’re dusting off the cobwebs, an early-season round with a college buddy is a PERFECT opportunity to illustrate this lesson. For Round Recap #4, Jeff Sartorelli joined me on day-three of my golf stay-cation as we visited a local staple, Crystal Lake Golf Club in Haverhill, MA. We have a lot of history on this track, and since a few other crew members have been on the course this year, we mix in a few highlights from their rounds, and a few memories as well.

After such a crappy March/April, it was such a blessing to have back-to-back nice days. And on days that I took off to golf, no less.  It was a Friday, not a lot of folks on the course, so we gunna play some golf today.

It’s always awesome catching-up with friends over an agonizing round of golf. This was Jeff’s first round of the year, and I played as if I hadn’t played yet either, so we we’re sure to stay positive throughout. (A few Twisted Teas may have helped.) With that type of round comes the moments you’ll fondly look back on and say, “I honestly hope I never play like that again.” Case in point, Jeff’s situation short of the green on #3:

In times like these it’s important to stay positive. I believe in the power of putting good vibes out there because eventually they make their way back. Even when you’re playing ricochet shots off trees, once in a while they end up in the fairway.

It all started to come together by the later holes, as is usually the case. But there’s one thing that the golf gods couldn’t take away from us, and that was the weather. Here are a few scenic shots of the course from this round and some prior missions. This place has really transformed in the 20 years we’ve been coming here, through a slew of changes in scenery and one in ownership.

CaseyB on the 18th tee 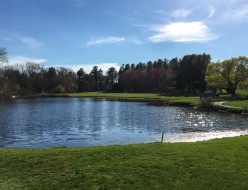 View of the “pond” from the 15th tee. There’s a valley on the other side, and the green is elevated, which you can almost make out from here… 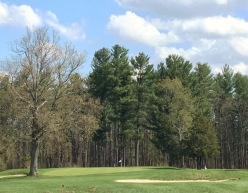 Looking in at the 8th/3rd shared green, from the 8th fairway. (Side Note: that tree on the left SUCKS!) 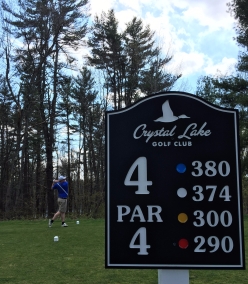 Jeff launches his tee shot on #4

The aforementioned chip from the path.

Steven out of the rough during the epic rain match of September 2012.

A few of those pics bring back memories, too. Much like our Round 2 Recap, Steven and I had one epic showdown in the rain back in September of 2012, which taught us the value of keeping a tee time – because those are memories you can’t forget. The struggle, the laughs, the duffs, the few amazing shots: it’s all part of this crazy, beautiful game we love and hate, but ultimately love so much.

The scorecard from this round mysteriously went missing… but if you haven’t learned by now, it’s all about the ride.

One thought on “Round Four: Crystal Lake Golf Club”